The Koh Ker complex of the temples is located in Northeastern Cambodia.. This is the conventional story:

“Army General Jayavarmal separated from the central government in million-city Angkor, from which his uncle ruled with the entire Khmer Empire. Jayavarmal built a complex of the temples, proclaimed as the King while Koh Ker became the capital city. The history remembers him as the King Jayavarmal IV.”

My arrival to Cambodia had for a goal not only the visit to the Angkor Archaeological park with many temples, but also to visit the Koh Ker pyramid. After I saw many temples, I arrived at the conclusion that the Koh Ker pyramid is the only true, real pyramid on the Cambodian lands. It seems that it has nothing in common with the other pyramidal temples, largely decorated with Hindu symbols. 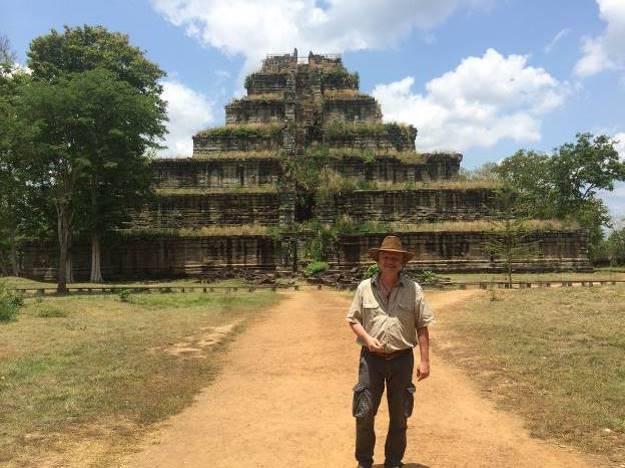 Koh Ker is 115 km away from the Siem Reap and Angkor Wat. Archeological park Angkor is visited by several millions of tourists a year. Koh Ker is forgotten, the basic operations were done in 1960’s to prevent the further decay, but the renovation never happened.

The pyramid is inside the great wall, in the plain. It’s surrounded by an artificial lake. It rises towards the skies. The numbers I took from the Internet were wrong. My measurements at the site show the length of the sides isn’t 50 meters but 66 meters. Its height isn’t 37 meters, but 40 meters. 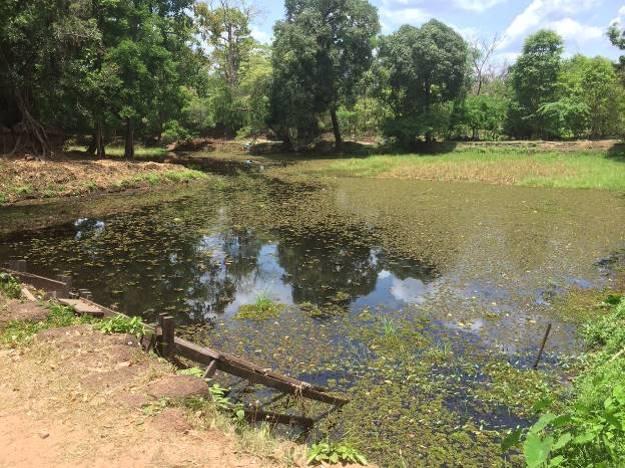 The first level of the pyramid has 11 rows of blocks. The second level has 13 rows, and all other levels (third, fourth, fifth, sixth and seventh) have eleven rows of the blocks. The blocks are joined with the mastery. No binder, plaster or cement. The hexagonal blocks serve to lock down the whole structure.

The orientation of the sides is proper to the cardinal points. The only entrance to the pyramid is from the west side. There are no feasible entries to the pyramid. Most probably the hidden entrance is located underground.

It’s forbidden to climb the original stairs which are in ruins. But, there are the improvised wooden stairs from the side to allow the visitor to climb to the top. 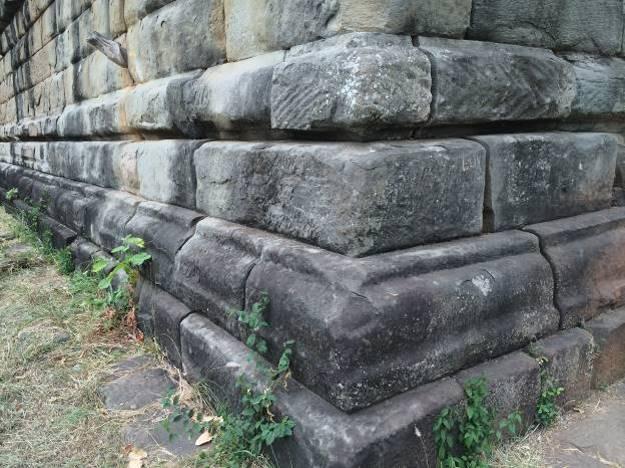 The blocks of the first six rows are between 500kg and 2000kg in mass. The big blocks are on the top and they reach up to seven tons. The square frame shaped from the blocks on the top has the exterior decoration with Hindu design. The gods are holding, not the Earth, but the Sky in their hands.

This frame made by the biggest blocks frames the inner passage, “chimney”, which goes all the way to the bottom of the pyramid. The Energy “chimney”. 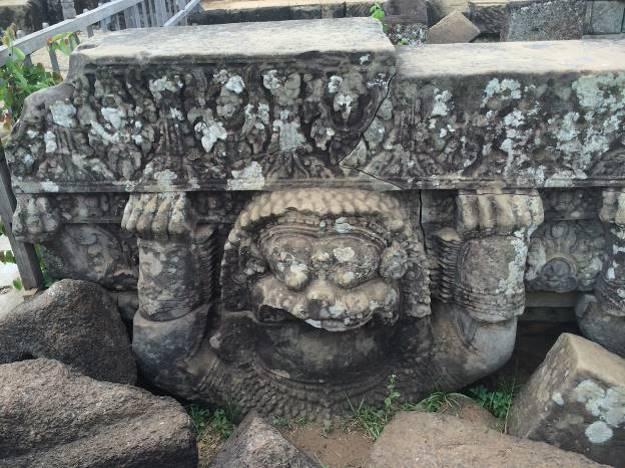 Almost all the elements for the pyramid as the energy machine are present here.

The pyramid is the most powerful shape when it comes to energy. It amplifies the existing, natural sources of the energy.

The artificial construction material, the sandstone blocks (conductivity) and volcanic blocks (the presence of the iron as the source of the electromagnetic). The constructed artificial lakes around the pyramid and the channels allow the water flow, releasing the negative ions as the energy source and usage of the kinetic energy of the water stream.

The concentric squares (walls and terraces) are becoming smaller, directing and focusing the terrain energy to the pyramid. 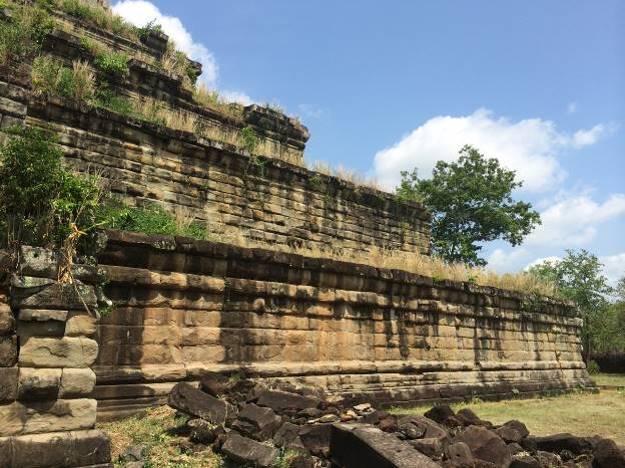 The vertical interior passages focus the energy. The result: pyramid as the energy amplifier.

Poor ornamental on the pyramid reminds of the Hindu religion and the Khmer ruler from the 10th century. But, the right question is, who was the architect who had consolidated inside himself the knowledge of geodesy, astronomy, construction engineering and cosmogony? This, identical knowledge had the architects of the Kukulkan pyramid on the Yucatan (Mexico), Mayan Pyramid in Palenque (Mexico), Tikal (Guatemala) and Copan (Honduras), Pyramid of the Sun and Moon in Teotihuacan (Mexico), and so called, Cheops and Khafre pyramid at the Giza plateau (Egypt), twenty big Shanshi pyramids (China), Bosnian pyramids of the Sun and the Moon (Bosnia), Gunung Padang pyramid in the west Java (Indonesia). All the mentioned pyramids have the energy beam on the top.

The architect carefully arranged the structure, water surfaces, and water channels. In the explanations, it is sure they spoke to the kings about the artificial lakes as the “proto-ocean” from the Hindu legends of the creation of the world, but as well as on the practical aspect and irrigation which allowed the Khmer State to have the economic boom from 10th to 13th century. For the architects, the water was necessary only for the kinetic energy.

The impressive height took the kings to the sky, closer to the Gods and the fulfillment of the “Axis-Mundi” legend. The Gods had to be satisfied with the king’s magnificent architectural undertaking and show mercy in case they decide to reside exactly in that location on the Earth. But, the architects also used this building to create a beam of energy which sends the information on the Earth’s frequencies and it’s “health”.

Top of the Koh Ker Pyramid was ideal for focused meditation. So, the information comes to me:

The pyramid was built over the already focused energy sources. The geometrical shape was ideal for the manipulation with the energy. Angkor Wat is built over a different kind of underground energy, which looks more like ring energy. Therefore, there is a different design of the pyramid temple of Angkor Wat.

Those who are climbing today to the top of the Koh Ker pyramid are used as the working force during the construction of the pyramid. They come guided by instinct, not knowing the true purpose of this building, not then or now.

Even if it was on +36C the stay in Cambodia was very satisfying. The Koh Ker pyramid confirmed my doubts about the existence of the global school of cosmic architecture.

These unknown architects used the local customs, religions and workforce to realize their own goals.